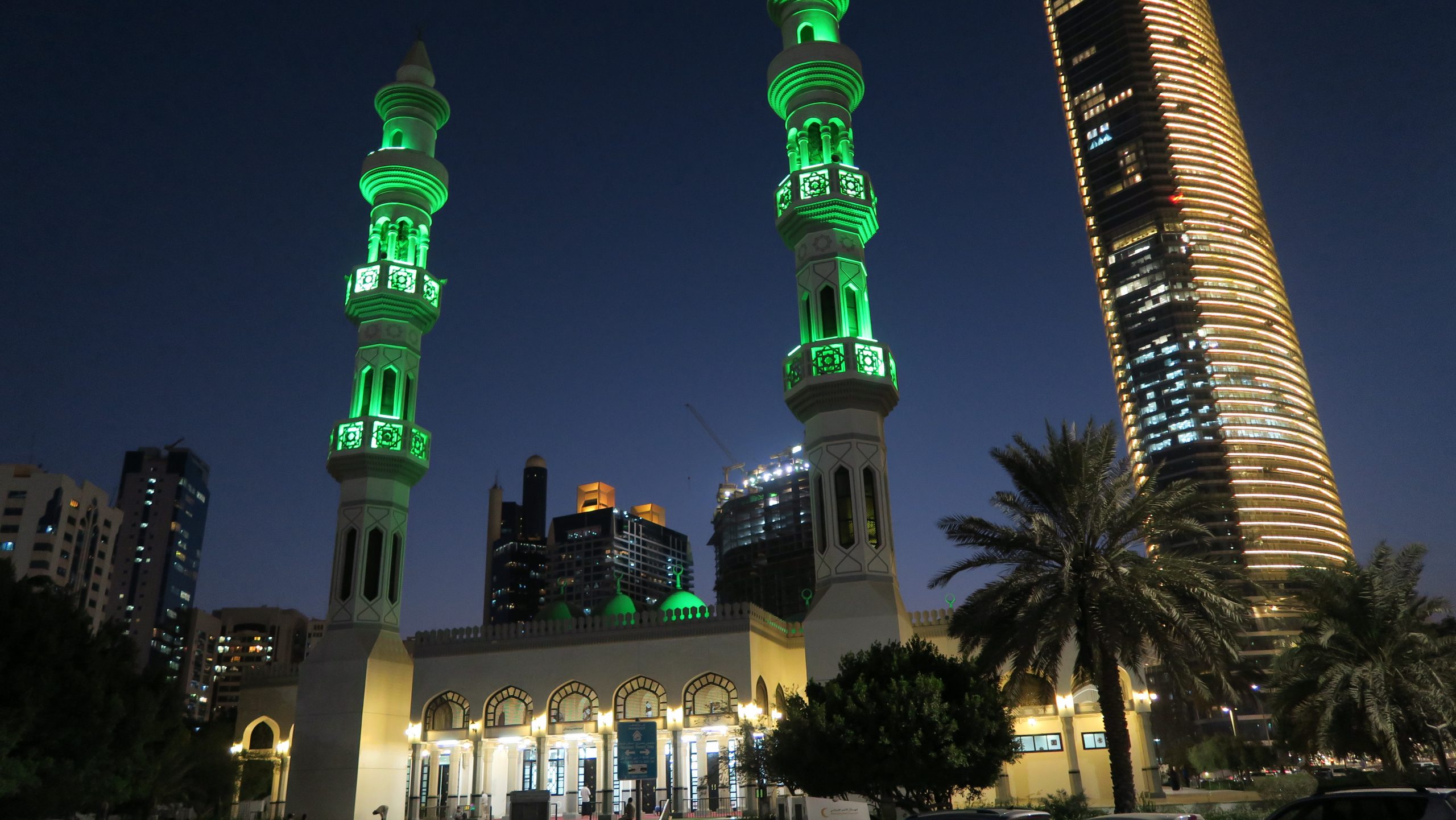 If you’ve heard of Abu Dhabi you’ve probably heard of Sheikh Zayed Mosque, the Grand Mosque of the Emirate. You may not know that in the UAE there’s actually more than 5250 mosques and musallahs and the figure is rapidly increasing. There are over 650 places of worship in Abu Dhabi (I’ve sourced that number from a listing of venues for the Eid prayers).

Most places of worship deliver the Friday sermon in Arabic. However there are a few mosques in which the sermon is delivered in Urdu, Malayalam and English for the benefit of expats and non-Arabic speaking travellers. Every mosque I personally visited catered for female worshipers.

I had the pleasure of visiting a number of mosques (masajid is a more appropriate term) and musallahs, some of which are within a 2 minute walk away from each other.

This mosque is located next to Ittihad/Etihad Square.

I’m pretty sure that this is the mosque located next to Kalyan Jewellers in Abu Dhabi. It’s the only mosque in the vicinity that I can vaguely see on the low-resolution Google Earth images.

Decent sized masjid in the middle of the city with plenty of parking. Perhaps there are too may fluorescent lights within?.

This is located next to the Abu Dhabi City Municipality building.

I liked its minaret.

There are 2 buildings on the site but it seems like prayers are only opened within one of them.

I didn’t like the fact that the taller Du cellular tower is located directly beside the minaret.

I tried very hard to locate Madina Zayed mosque (which according to Here Maps should be across the road from the Abu Dhabi Municipality Building) and Zayed 2nd Mosque (which should be behind Etihad Square) with no success. Even Google Maps doesn’t list many places of worship correctly – this had me walking in circles in the blazing hot sun at times.

And finally there is:

The mosque was constructed between 1996 and 2007 and the design is influenced by Mughal, Persian and Moorish architecture. It is the largest mosque in the United Arab Emirates with a capacity exceeding 40,000 people, a lenght of 420m and width of 290m.

There are 82 domes of 7 different sizes and 4 minarets.

I loved some of the mosaic tile designs.

There are over 1000 columns in the structure.

Reflective pools surround the mosque to enhance its beauty. Although I didn’t see any “No Swimming” signs I’m pretty sure it’s not permitted.

To check the prayer and visiting times, visit szgmc.gov.ae

To learn more about Abu Dhabi check out these articles:

The Malls of Abu Dhabi

The Souks of Abu Dhabi, UAE