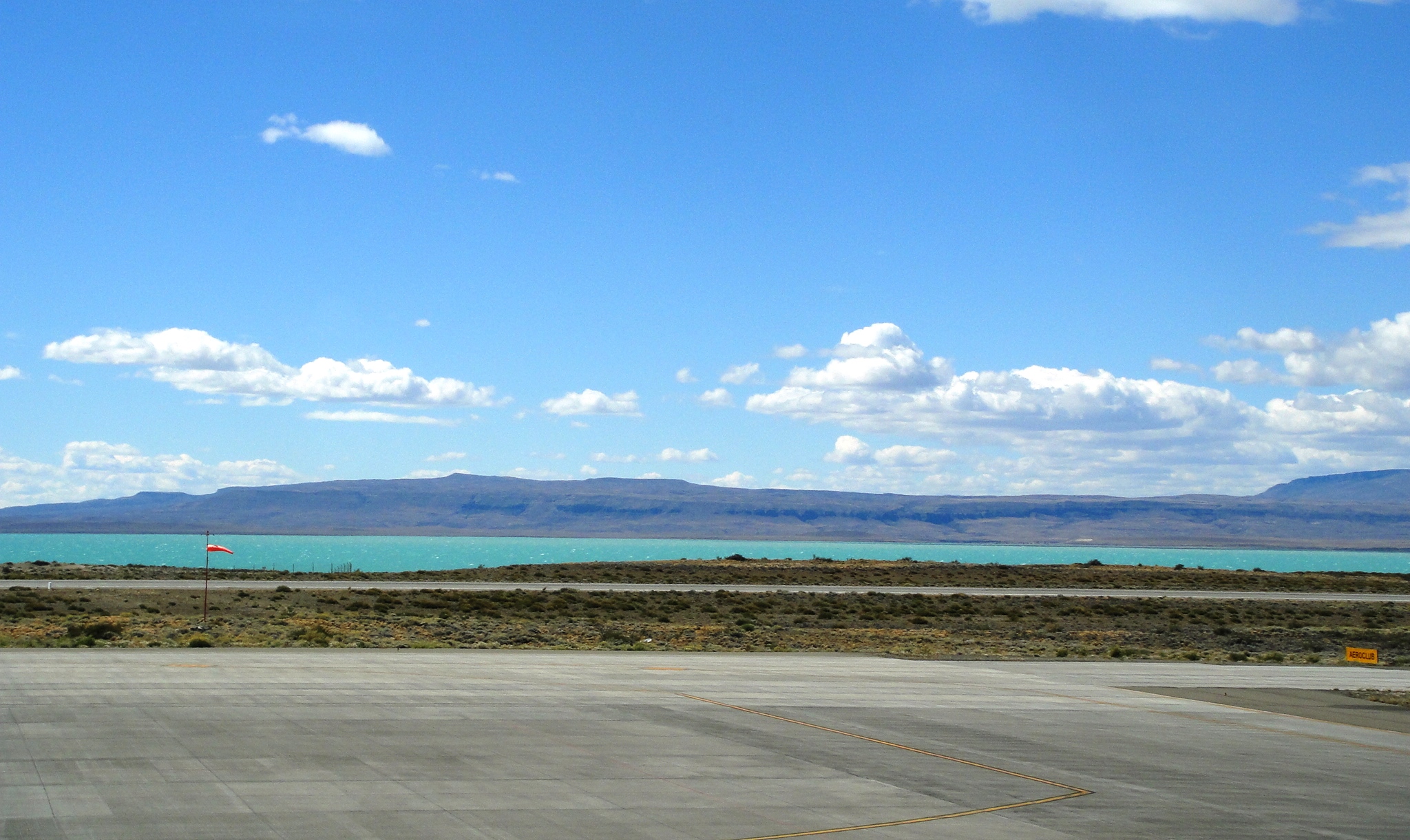 One full day in transit! Not my favorite way of spending holiday time.

I awoke very early to catch the 8am bus from the El Chalten bus station to El Calafate. I left Rancho Grande hostel for the station at 0740 thinking it would be a 10 minute walk, but it ended up being a very fast 15 minute jog, with my luggage.

Fortunately I was on the bus in time. The journey was quiet and uneventful as everyone just slept. At 1030 am we pulled into El Calafate Airport. The bus continues a further 23km into El Calafate town but I decided to get off and kill time at the airport until my flight at 1635. This is one of the most beautifully located airports in the world, overlooking Lake Argentina.

Best lookout from any airport, ever!

The airport has free WiFi connectivity to the internet – you just have to complete a registration page with any “garbage info” every 30 minutes. My Nokia Lumia 620 couldn’t connect to it so I tried my Samsung Galaxy Neo phone and this did work.

I kind of lost and found my Nokia phone twice at the airport. I once forgot it at a phone charging station and again at inside the airport cafeteria. I think I need to get a very bright cover / case for this full black phone – which I’ve lost and found at least 7 times on this trip. It’s not me, it’s the phone (I don’t lose anything else)!

Aerolineas Argentinas probably serves the most boring, unhealthy food of any plane I’ve travelled on. You get a box with mini cheese crackers in one pack, one lemon cream biscuit in another pack and one chocolate biscuit in the third. Edible, but not really…

After the 1 hour 45 min  flight to Bariloche and layover we got served another round of crackers and biscuits with hot and cold drinks. Many of us who were from the El Calafate flight requested 2 drinks – it was a long day on board and the plane was hot.

The 2 hour flight to Buenos Aires was amongst the scariest I’ve been on. There was extreme turbulence as we flew through a thunderstorm. All passengers were staring out the windows to spot land prior to landing as it was extremely cloudy and we couldn’t see a thing. The city lights reflecting against the clouds made it appear as though we were flying through a firestorm. Some people threw up, held hands or just sat silent. There was a huge round of applause when we landed.

My bag was opened and searched by airport security before it came out onto the baggage carousel. I know this because it was the first bag out, with the combination lock removed (but not damaged) and placed on top of the bag. I did a quick inspection and saw that they opened my tub of washing powder – and spilled a lot of the powder in my bag before sealing it.

I took the Manuel Tienda Leon shuttle to Florida Suites – the price was up by 10 pesos (since my previous visit 5 weeks prior) to 110 pesos.

I checked in (while getting a little soaked in the rain between the shuttle and Florida suites), left my bag in the room, cleaned out some of the washing powder, then headed down to reception and asked for a recommendation on some good pizza at 1130pm. They referred me to Los Cueros two blocks away where I had an interesting but unexpected olive pizza with no cheese. I expected cheese, but the pizza base with a tomato paste, olive oil, pesto and olives was quite nice. It reminded me of flammkuchen which I’ve eaten in Germany (veg version).

On the way back I unexpectedly met my Singaporean friend that I had previously met in Puerto Natales (Chile) and El Chalten (Argentina). She was staying in the same hostel that I was. What a small world!

That night I tried to figure out what I would do the next day, and that weekend. Do I remain in Buenos Aires, try to head 6 hours south by bus to Mar Del Plata (a beach resort) or head into Uruguay? After being unable to get any accommodation in Mar Del Plata I decided to spend one more day in Buenos Aires (the weather forecast was good: a cool was day expected) and 2 nights in Montevideo, Uruguay (the country next door). I just love the ease of backpacking in South America with a South African passport (no visas are required).